WebSummit 2015 is a tech conference for geeks, this time it was organized in Dublin, Ireland.

I encourage you to read it – it’s only 7 minutes long.

TL;DR from that article: WebSummit speakers are not attending to wow developers and creatives, they’re here to impress business owners. It’s that simple. Web Summit might be great if you’re a startup and you’re looking for investment. 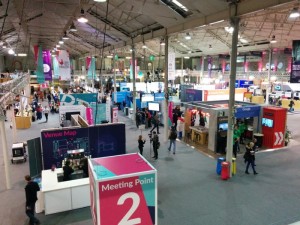 I’m software developer experienced in writing webapps on jvm. What, a guy like me, might be looking for at such a conference – touted as `Davos for geeks`? Maybe some leads (except a few interesting talks – Bryan Lilies, Alistair Crolls). Conference was huge. I usually attend developers conferences up to 1k of people, this one was massive 30k attendees. I had an amazing time in Dublin with my teammates, every evening we joined night summit to make a new friendships. As a neophyte salesman you wish to talk to each and get know every single story but it’s simply impossible and unfortunately you have to live with that awareness. After a first few talks you got an impression that you are all around amazing talents with amazing ideas and products.

I’ve met a guy coming here for 1mln $ for his ultra fast(~1h for complete app) mobile apps drag&drop building framework. Of course I have seen a few of such a wonder-tools before and after very promising and beautiful beginning of those, users wanted something custom. I really believe the world needs more of those. One day it will happen and all software developers would be fired ;)

I remember a cool guy from Australia living with his wife in Chile and having a social startup that helped neighbours organize their kids a schools transport with their private cars. I suppose the are no buses or are expensive or you can’t trust anyone, anyway it solves nicely a serious issue. 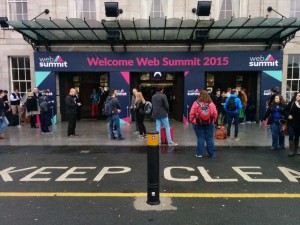 I was impressed by guys with glowheadphones.com. I saw some great pitch talk from radinn.com making me wanna throw my money into them. I want to order www.flexibell.eu to get call to my smartphone from people standing in front of my doors. But as I don’t practise expensive shopping trips to Mediolan or London I can only recommend to some a shoptrotter.com for planing that routes and as I don’t have a dog I won’t be a user of one of many dogs social services.

I’ve gathered some business cards from distinct companies, I’ve also exchanged some electronic ones. I talked to some potentially interested in our services personalities. I had one inquiry about a project estimates and one about our rates… and that’s all. No serious lead worth to put in our highrise. At the conference I met nice guys from another polish company with comparable luck of turning WebSummit leads into sales ;)

I was excited to see David Heinemeier Hansson and Raffi Krikorian live but both didn’t make it to come at the end. David has justified his absence and published a great – common sense – article https://medium.com/@dhh/reconsider-41adf356857f that should be familiar for fans of “Rework” and “Getting Real”.

3rd day of enjoying #websummit. Catch us if U want to know how to #scale your #app #softwaremill @WebSummitHQ pic.twitter.com/jphX0MAwlb